Xploits: Winning a championship with the help of Xert

I only started cycling a few years ago but quickly became interested in training and competing. So, I hired a coach, Yang I Ti, to help get me started. He gave me a weekly training program that I followed very closely. But training with power, and concepts like ramp rate, were still new to me and I only began to understand – and use – them when I signed up for Xert a little later.

Preparing for, and racing, my 2018 goals events

Early in 2018 I was invited to ride with an amateur team called ‘Jamaica’ to ride the local championship series in São Paulo. I needed to get serious about training! I read everything I could get my hands on about sports physiology and training so that I could coach myself, but within a few weeks I ended up feeling the symptoms of overtraining. I really didn’t know how to train, but despite that I was keeping myself in the top 5 in the championship series.

Starting to Use Power

In mid-May, I finally got a power meter; I bought a Power2Max from a friend who was moving to another country, installed it on my bike, and the next day I competed in a time trial.

Time trial, the day after getting a power meter!

Even without seeing my MPA (I was using a Garmin Edge 500, which wasn’t Connect IQ compatible), I had my first breakthrough, right on the line! So even though I started out a little hard, I was able to pace my effort to the max all the way to the end.

I continued to train as I did prior to using a power meter, and it wasn’t until I signed up for Xert that what I was feeling in June was confirmed – the data indicated almost immediately a high level of fatigue. I was doing too many hard workouts in a row without enough rest (you can see my ‘tired’ status (yellow line) in my XPMC graph below). 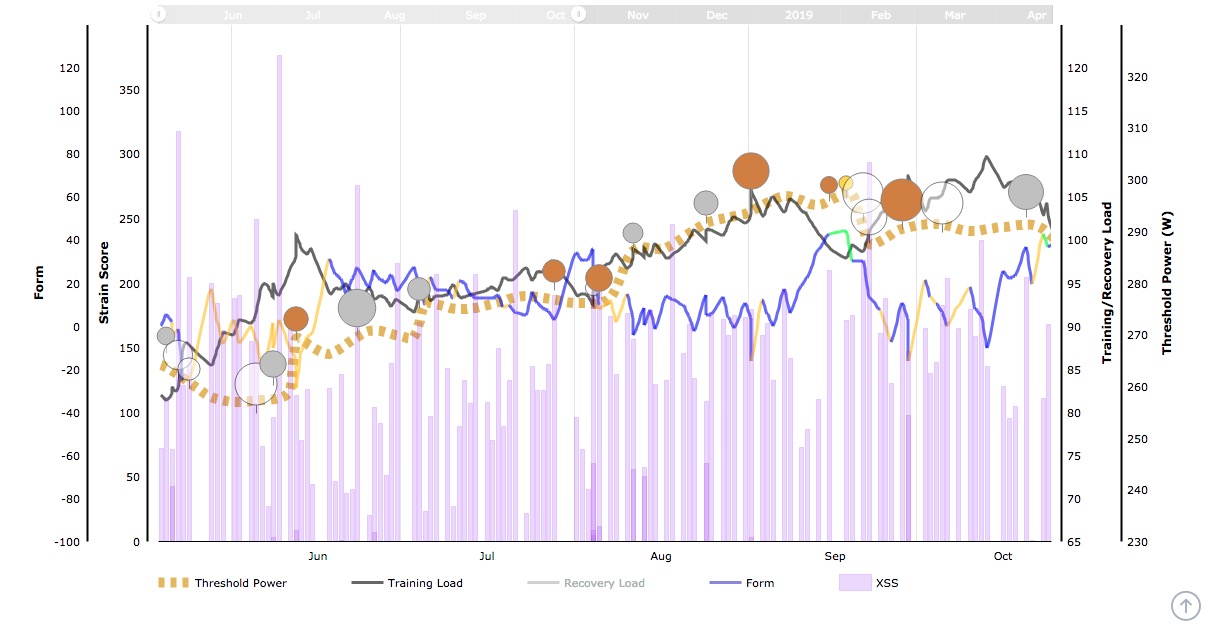 Steady progression (after doing too much in June) to see my Threshold Power increase 15% (almost 40 W!)

So I decided to get some help. I bought a Garmin Edge 520, and I signed up for Xert and began to follow its recommendations.

After the TT in June, my next goal was a stage race, with 3 races, in early August: two road races and one team time trial (TTT). My peak would have to happen in only a couple of months!

Without a power file from racing the same event in a previous year, I wasn’t sure of the demands of the event. I didn’t know which Athlete Type to choose in Xert, so I chose ‘Rouleur’ (as it turns out, I wasn’t far off – see chart at the end of this article).

At first, I didn’t entirely follow Xert and occasionally I ignored the yellow or red stars (tired and very tired training status, respectively), which meant I often couldn’t finish my workouts! I even ignored the recommended workouts: for example, with a status of 2 stars I tried to do workouts that were 4 stars or more, and often couldn’t complete them. This is when I started to understand the Xert process! I saw that if I chose a ramp rate of between 2 and 3, and followed the recommendations, I would be able to complete the training and achieve my objectives. So I followed the recommendations to prepare me for my race weekend!

My First Goal Event: The UCFL Winter Race: a 3-stage weekend, and how it went

As I progressed through the training, the workouts became progressively more difficult. Although I had been training hard for a few years, I had never done workouts like I was doing in Xert, and before long I was reaching power targets I never thought possible. So I knew I was going to be ready to race…

By following Xert, my Focus progressed from Breakaway Specialist to Rouleur right in time for my stage race weekend, and my Threshold Power continued to increase.

The first race was the Team Time-Trial (TTT). Since none of us were time-trialists, we tried to save ourselves for the next event using the Xert MPA and Fat & Carbs datafields on our Garmins to help us manage our pace.

We maintained a pretty high – but not too high – steady pace in the TTT so that we didn’t fall behind in the overall standings and left something in the tank for the circuit races that followed.

In this first of two circuit races I was well positioned during an important climb early in the race, and I nearly had a breakthrough as I almost went to my maximum to force a selection in the race. Three other riders counter-attacked and formed a strong breakaway out front. Then, in the last 30 minutes, one of the breakaway riders (a teammate of mine) was dropped by the break. I saw the opportunity to race for third place, so I started to attack on short climbs to wear down my opponents. (You can see my MPA starting to dip in the last 30 minutes as I started my attacks.) On the last climb I succeeded in getting away from the group and dug very deep (my MPA came way down) to get third place.

On the second circuit race it was another tough day. The finish line favoured the sprinters, something that I was not strong at, or had even trained for. At one point in the race, shortly before the middle of the last lap (approx 1:30hrs into the race), a rider attacked the peloton and took another competitor with him. A teammate of mine suggested that I should try to reach the break… that would be my chance for victory! So I attacked, passed the other chasing groups, and reached the lead breakaway. From then on we worked together to keep the peloton from reaching us and I won the race from the breakaway to take the lead in the championship series!

The last race of the weekend: Farrapos Paranapiacaba

Throughout the early part of the race I tried to wear out the peloton on a few short climbs. That’s when a teammate saw the opportunity for a breakaway, and attacked. As my ranking in the overall standings was high, we decided to control the peloton so that the escape could stay away. As soon as we learned through race radio that my teammate’s breakaway was close enough to the finish line that they weren’t going to be caught, I attacked on the hardest section of the course to get some more points from my competitors – that’s where I had a breakthrough in my Peak Power. By the end of the race I was alone with two competitors from a rival team, but from another category (my teammate was still up the road). Both of them continued to attack me, but I managed to stay ahead to get second in my category.

There wasn’t much time to train for this event, just 4 weeks, and I was already tired after many months of training. As each event had a different type of terrain, I changed the Athlete Type each time to better suit the demands of the event. This last race had shorter climbs and so I chose Puncheur (I was at the end of the build and the peak phases). Seeing how important it was to follow specific training to reach my potential, I tried to follow the suggestions of Xert more closely to prepare for this race.

At the beginning of the race I tried to dictate the rhythm of the first climb in an attempt to create a selection within the peloton. We had agreed that another teammate would try to win because I was already far ahead in the overall standings and did not need that win to keep my overall placing. But my teammate wasn’t having a good day. When I went back to see if everything was OK with him, two competitors attacked on a climb and opened several seconds advantage on me. It was only a few kilometers to the finish line and I couldn’t let them get there alone, so I lowered my head and chased for a few minutes. That was one effort I clearly would not have been able to do before adjusting my training; they were both strong time-trialists. I eventually caught up to the breakaway, attacked on the climb, but saw that another cyclist had followed me and I unfortunately no longer had the strength to compete for a sprint. So again, I got a second place, but I was very pleased with what I was able to accomplish.

After this race I did regret not having done any sprint training; I didn’t do this training because I had too many days in a row with yellow stars (tired); I wasn’t recovered enough to do them and maintain my weekly focus.

Looking Back: What I learned and what I’ll do differently next season

From these races I was able to determine the Focus and XSS of the events (the ‘demands’ of the race) and especially what I was missing in my training. To be better prepared next year, I am going to:

Ironically, Xert recommended I do more Puncheur and Pursuiter workouts but I ignored the advice! I wasn’t doing the short Focus/high intensity VO2 training that Xert suggested at times, including the Closer 140 workout. After analyzing the time and power of the last sections of the races, I noticed that training this Focus would give me the time in the right power zones to be more efficient, and to repeat those efforts over and over.

I am already training for an important event next year, and knowing my past mistakes, I hope I can make better choices that could bring me even better results!

François Skaf is a 35 year old cyclist from Brazil, and only just discovered the sport a few years ago in an attempt to quit smoking. Early-on, when he was passed by a competitive cycling peloton, he decided that this was a sport he’d like to get a lot more involved in. Now, after only a few years of riding – including a few periods of overtraining – he’s learning to train smarter with the power of Xert. And he’s winning!

Xploits is a collection of stories by Xerters from around the world, about their goals, achievements, and how Xert helped them get there. If you have a story you’d like to share, please email support@xertonline.com