The Science: Metabolic Pathways and How They Affect Your Riding and Racing

In this article, we will provide an overview of metabolic pathways and how these pathways affect your riding and racing. Through these metabolic pathways, the body converts stored chemical potential energy from food, into mechanical energy used to power our bikes or our runs. How this energy is converted is dependent upon exercise intensity, duration, and nutritional state. A greater understanding of these pathways will help you get more from Xert and further develop yourself as an athlete.

The “currency” of cellular energy is adenosine triphosphate (ATP). However, the cellular concentration of ATP is only enough to sustain a few contractions. To counter this, the body produces additional ATP through various metabolic pathways, depending on cellular conditions. The three main energy systems are aerobic oxidation, glycolysis, and phosphagen cleavage.

Figure 1. The relationship between power duration and metabolic pathways. It’s important to note that these energy systems do not work independent of one another, but rather work synergistically to respond to the stochastic demands of cycling.

When exercise intensity is low, energy can be derived through the oxidation of fats into carbon dioxide. Aerobic oxidation is highly efficient, but is rate-limited. The human body is able to aerobically oxidize fat very efficiently when blood lactate levels stay similar to resting values, correlating with intensities below LT1 – approximated in Xert as Lower Threshold Power (LTP). This aerobic system is capable of providing many hours of energy because the body contains a virtually unlimited supply of fats. As exercise intensity increases – above LTP, but below Threshold Power (TP) – the aerobic oxidation of fats cannot deliver energy at a sufficient rate to meet the demand, and the body begins to use glucose as a fuel source. As power output approaches Threshold Power, anaerobic glycolysis (the breakdown of glucose in the absence of oxygen) gradually increases, resulting in the production of lactate. Provided power output remains below TP, blood lactate concentrations remain constant because the rate of production is matched by the rate of clearance from the muscles.

Once Threshold Power is reached, the body can no longer clear lactate quickly enough, resulting in the progressive accumulation of lactate. Continued anaerobic glycolysis provides rapid energy conversion for high intensity work, but at the cost of efficiency. This principle is modelled in Xert: as an athlete’s power nears their Maximal Power Available (MPA), the strain rate increases. In other words, the rate at which XSS is ‘earned’ per minute increases as power nears MPA. The result is rides and workouts with far more than 100XSS in an hour! Furthermore, since the body is limited to a finite store of approximately 500g of carbohydrate, carbohydrate supplementation (bars, gels, etc.) may be required during high-intensity training sessions or during prolonged endurance rides.

None of the aforementioned energy systems are able to generate ATP quickly enough to fuel short (<10 s), peak-intensity sprints. During these short, maximal efforts, ATP is replenished from the anaerobic breakdown of phosphocreatine (PCr). Muscle cells contain only enough PCr to power a short sprint, thus limiting an athlete’s top-end power. It’s important to note that replenishment of PCr can only be performed under aerobic conditions, and that the recovery is dependent on muscle oxidative capacity (think LTP here). Because of the nature of sprinting, sprints are often associated with peak strain, since work is being performed close to MPA.

As stated previously, it is important to highlight that although certain intensities elicit greater contributions from certain pathways, these systems do not work in isolation. Instead, all pathways work together in response to the dynamic energetic demands of cycling.

We’ve seen how exercise intensity and duration affect the metabolic pathways, but what about nutritional state? Some athletes have taken to the idea of performing fasted workouts, intentionally depriving their body of carbohydrates. The idea is that the limited availability will provide superior adaptations in oxidation of fats, increasing the sustainable aerobic power output. On the other hand, several studies have shown the efficiency of “carbo-loading”, or a carbohydrate-rich diet in the days leading up to a big event. In carb-loading, the general idea is to supply (and subsequently store) excess glucose to the muscles. A more detailed discussion on this topic is beyond the scope of this post, but if you’d like to know more, at the end of this post is a list of peer-reviewed articles on the subject. 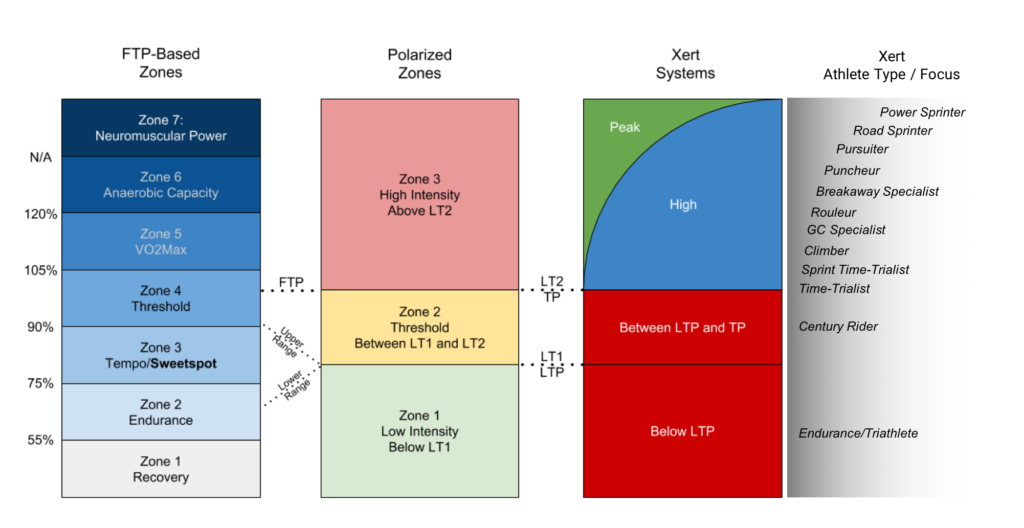 In this post we covered the main metabolic pathways that fuel your rides. Low intensity exercise results in aerobic oxidation of fats, while high intensity efforts are anaerobically supplied by glycolysis and the breakdown of phosphocreatine. We also discussed how nutritional status can also influence metabolic preference. I hope you found this information helpful, and if you did – please share it with a friend! Be sure to follow along, as I will expand upon this foundation in an upcoming article where I will discuss how to utilize the power of Xert to focus your training on these pathways and make you fitter and faster than ever.

To learn more about the ideas presented in this article, please feel free to review some of these resources:

About the Author: Scott Steele

Scott Steele graduated with a Bachelor of Science in Biochemistry from Winona State University (Winona, MN) and is currently completing his Master of Science in Applied Health Sciences at Brock University (St. Catharines, ON) under the direction of Dr. Stephen Cheung. His interests lie in metabolic responses to prolonged exercise, and the subsequent effects on performance. When not in class or collecting data, you can find him on the pavement, on the gravel, or on the local trails.