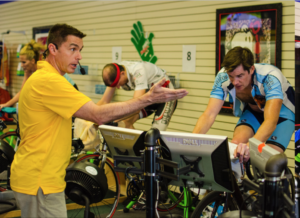 “I first began working with Xert on an experimental basis back in the late fall of 2015.

In early 2016, I used it exclusively to train for a stage race that was to be held in April. The workouts were REALLY hard, but Xert showed that my fitness was improving, and my ‘focus’was hitting the goals.

Furthermore, Xert told me when to back off and ‘focus’ onrecovery. I was really skeptical at first, but became more and more convinced as time went on. I ended up with one of my best efforts at the event in five years.

The latest versions of the software and the interval protocols have further convinced me that Xert is accurate, predictive, and is an all-new paradigm for cyclists and triathletes looking to improve their fitness and performance.

I love it so much that I have begun to implement it with clients at my studio and online. Anyone with a current-generation Garmin or Android App can run the program, witness the workout in real-time, and challenge themselves mentally and physically to regular fitness breakthroughs. As a full-time coach since 1993, I really have never seen anything like this at all, and I can’t wait to see what’s next!”

Richard also provides detailed training on how to use Xert.  You can find out more about the Richard and the Dallas Cycling Center with this link.