Many of you are likely wondering: “How do Xert and Bioshift relate?  They seem so different.”

To answer that question, we turn to another seemingly disparate topic: Heart-rate data and analysis.

About four years ago, our research began by examining power and heart-rate data and their relationship using performance data collected while cycling.  We had known that power and heart-rate, or more specifically steady-state heart-rate, are nearly linear in their relationship.  We can expect heart-rate to increase at about the same rate as power does as intensity increases.  So called “Ramp Tests” were performed that demonstrated this relationship.  What was discovered was that steady-state heart-rate and power can be made more linear when you account for cadence.  This would appear intuitively true as pedaling at very low cadences at high torque but with low power output can be very hard work for the body, thus heart-rate increases.  Similarly, pedaling really-really fast producing little power also is hard-work for the body and heart-rate increases.

What was postulated then was that heart-rate was being subject to a slow-component and that when work was performed above a threshold power, it would respond differently to power outputs.  Several methods were attempted early on with varying degrees of success.  Using regression techniques, all the methods seemed to improve the linearity but not always consistently.  This all changed when we introduced into our model, a varying maximal power, one that was a function of the work performed above threshold.  Our regressions results jumped suggesting that our formula was it.  Fatigue manifests as a reduced maximal power and heart-rate response to power decreases as fatigue progresses.  The relationship between work performed above threshold and its impact to maximal power was thus established.

Throughout this process of discovery, other factors that affect heart-rate such as heat dissipation were also introduced.  All of these were built over a novel heart-rate kinetics model that enabled the ability to establish what an equivalent steady-state heart rate would be, based on the current heart-rate and its rate of change.  Given that there was no term for this value, it was decided to use the word “exertion” to represent this equivalent steady-state value.  It is a derived value based on heart-rate, its rate of change and individual heart-rate kinetics characteristics.

Having developed an ability to determine how to minimize exertion for a given power by varying cadence, optimal cadence could be determined. This optimal cadence would essentially be the most efficient for the body to perform as it would be the least taxing on the cardiovascular system.

Initially, the thought was to provide cyclists information on when they should change gears.  But then we had a better thought: if we could interface to a shifting system, rather than just provide information on shifting, we could shift gears on the cyclist’s behalf.  This became the genesis of Bioshift.  From there, it was only a matter of creating the interfaces to shifting systems, develop a platform to run the optimal cadence algorithm and calculate the optimal gear in real-time.  At first, we chose dedicated hardware and have now moved to wireless Bluetooth and smart phone technology.  With our fatigue model having been developed too, we could also account for how optimal cadence will change with fatigue.

The original fatigue model established how maximal power available (MPA™) was affected by fatigue and accounted for both work expended and recovered above and below threshold power.  Initially, it was simply used in a regression to establish threshold power from heart-rate, cadence and power data.

It was only after a number of months and upon further inspection and rearrangement of the formula that a new power-duration model was formulated.  It was a novel, three-parameter model – peak maximal power, above threshold capacity and threshold power – that closely matched mean-maximal power values across the entire power-duration (PD) spectrum, from 1s all the way to over an hour.  It closely matched the two parameter Monod-Scherrer CP/W’ model at longer durations but didn’t suffer from its limitations.

What further distinguished the model is that not only could an entire PD curve be derived for an athlete with just 3 parameters, but a PD curve could also be established when the athlete was in a fatigued state.  An intermittent or fatigue-adjusted PD curve could be determined at any point.  We could calculate any mean-maximal power and time-to-exhaustion at any point in time.  Using this information in real-time applications was envisioned and the first thoughts about a possible mobile application were imagined. 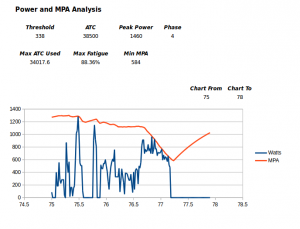 When we examined the meaning of a PD curve, the points on the PD curve have special significance – they represent points-of-failure for steady-state, fresh-to-exhaustion efforts.  The points on the curve represent MPA since, by definition, one cannot sustain the target steady-state power beyond this duration. Since we have a way of deriving MPA and if we plot power and MPA against time and inspect where they meet, we discover that these meeting points indicate points-of-failure.  These points mean that we just can’t hold the power we want, such as when we’re sprinting, failing to bridge, getting dropped or at the end of a steady-state interval, trying to hang on to the target power. These points express our limits of ability since we can’t go any harder at that instant.  MPA that’s derived with these 3 parameters defines the limits of athletic ability and exposes them in plain sight.

With MPA Analysis, Signature Extraction software and the vision of real-time fatigue, the development of Xert Online and Xert Mobile was initiated with the goal to expand them as tools that could be offered to cyclists and athletes to increase their knowledge of their athletic ability and potential.

Bioshift and Xert are both based on the use of power data.  But what about heart-rate data and exertion?  What happened to all that?

This is will be our third project: taking heart-rate data to new levels of analysis.  Our model enables the derivation of power and fatigue from heart-rate data.  Every individual has unique heart-rate kinetics characteristics and by determining this, we can obtain valuable information about them and their ability to perform from a standard heart-rate monitor. There will be many benefits to this technology – from sports, to military, to occupational, to clinical.