The Future of Power Meters in Sport

Cycling power meters have re-entered the spotlight with the ASO’s (the organization behind races like the Tour de France, Paris-Roubaix, and the Tour of California) Christian Prudhomme announcing their desire to ban the use of power meters at the Tour.  “We reassert our desire to see the end of power meters in races, which annihilate the glorious uncertainty of sport,” Prudhomme said.

Power meter use and their applications are growing, however. They are now into their third decade as a tool for cyclists and their coaches for the analysis of fitness and performance. Originally geared towards top professionals for use in training, their use has evolved to include nearly all professional and competitive cyclists to help them manage entire seasons of training and preparation for events. In fact, power meters are used by those simply looking to gain better visibility of their fitness and improvements over time.  They have moved from being an esoteric data gathering tool to something everyone can use.  New software tools, such as Xert, are extending the use of power meters by providing a deeper understanding of athletic performance, enabling the optimization of training and presenting real-time feedback and information to athletes during races.

This growth has not gone unnoticed.  There have been numerous new power meters come on to the market, include major brands such as Shimano and Specialized including them in their top end products.  The cost of power meters continues to decline as new entrants look to develop newer, better and cheaper ways to satisfy the growing demand.  Power meters are now seeing increased usage in other activities such as running and rowing for example and there is growing interest in applying the use of power meters in many other sports.

Power Meters in the Pro Peloton

There have been several articles written arguing for banning the use of power meters in professional cycling events.  The use of power meters is felt to eliminate the human element of the sport, where athletes are “riding by the numbers” rather than riding by feel and emotion. Banning power meters is an attempt to bring back the uncertainty of racing where riders would have to rely on their own self-awareness rather than relying on the precision of the power meter data. The idea is that without power meters there would be more errors in judgement, greater variability in how athletes perform, and thus a greater source of entertainment for spectators.

Many argue though that this is a step backwards.  One can make the argument that any innovation in sport that helps an athlete perform either improves results directly or reduces errors during competition.  Whether the innovation is a new tennis racket design, curved hockey stick, increased aerodynamics in a bike frame, etc. innovation in sport is part of sports.  In fact, commercial interest in new innovations is what drives consumer interest in new products, as both competitive and recreational athletes seek to use the most advanced equipment available in their sport.  Arbitrarily eliminating innovations in order to preserve the errors made by athletes as a source of entertainment perhaps oversimplifies the true essence of the sport and in fact constrains consumer interest in the sport in the end.

The advent of the digital era, with greater instrumentation and data analytics, is creating new opportunities for professional athletes and teams to stay ahead of their competitors. “Big data” has come to sports and is a growing area of interest.  Sports like Formula 1 racing have embraced data analytics to the point where its use not only drives the success of the teams, but the racing organization is also embracing it as part of the consumer-facing experience. Frank Arthofer, Global Head of Digital at Formula 1 racing, sees consumer facing digital products as a key part of the sport. There is recognition that the interest in the sport goes beyond the racing itself; there is also interest in the information that’s generated by the cars or athletes. How this information is used in social media, eSports and during broadcasts is critical to the long term success of the sport.

Indoor Cycling is All About Power Data

With the growing interest in indoor cycling, cycling fans are getting a first hand view of what information professional athletes have been using for years. In fact, the vernacular of power data analysis is becoming ever more familiar to those who are riding indoors simply to stay fit. “Watts / kg” and “FTP” are concepts that even those that have no intention of becoming professional cyclists, or even to compete in cycling events, have become familiar with.

But for indoor cycling, the relationship with power data goes much deeper. Power data is fundamental to indoor cycling. Together with your weight, the power data from a power meter or from a power-enabled trainer is used to propel your avatar and to decide how fast the avatar moves in relation to another avatar. Generate more power and the avatar goes faster. The intent in fact is to make the relationship between power and movement simulate real life as much as possible, and introducing additional elements like drafting and hills to refine it even further, results in an even more accurate sense of riding outdoors.

The simulation has become so realistic that competitions are growing in popularity, with indoor racing events even being broadcast as eSports. Indeed, one could argue that indoor cycling is likely the first eSport to bridge the gap between real-life athletic performance and the appeal of electronic gaming.

For indoor cycling races, power data is the medium by which the competition is conducted. Given the nature of how data is collected, new rules and guidelines have been developed specifically to avoid “data doping”, or the opportunity to cheat by manipulating the data used in competition. A Zwift Anti-Doping Agency now presides over competition in order to ensure those that compete, do so fairly.

Given Xert’s innovation in uses of power data, it is playing a greater role in indoor racing. Whereas on outdoor rides, where it can be difficult to view data in real-time, on a platform like Zwift athletes are positioning Xert metrics to help them manage their efforts and provide them a better sense of their efforts.

Xert’s Maximal Power Available (MPA) provides valuable feedback to help an athlete modulate their effort, saving energy for moments when they can attack or sprint for the win. This data helps them to know how much they have “left in the tank”, reinforcing how they feel and what they can potentially do in the race in terms of tactics and overall strategy. MPA and how it uniquely responds to each individual athlete, is becoming the essence of the race, i.e. that which is actively managed and used to win.

“Power meters are very useful in training but when riders use them in a race it means they know exactly what kind of efforts they need to make – for how long and at this or that level. But if a rider wasn’t sure that he still had enough strength, that would change things.” said Mr. Prudhomme.  Perhaps Mr. Prudhomme is referring to MPA in this statement.  He is suggesting knowing whether you have enough “strength” or “MPA” is the key to performance.  We agree.

But is the essence of the sport about who can better guess what they can do or is it about rewarding those with the greater fitness, greater preparation and better execution in the context of their own unique abilities?  Banning power meters may create a greater spectacle but so would playing golf without knowing the yardage, racing a car without a speedometer or playing basketball without knowing the score.  How this improves the sport is questionable. 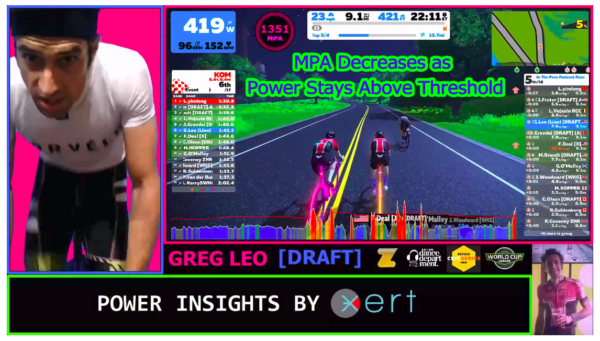 The insight provided by MPA is also useful in an eSports race broadcast to improve the viewing experience. MPA becomes the window into the athlete. Avatars don’t have expressions: you can’t see them grimace, wince or gasp for air.  Riding at 500W is fairly easy for most racers .. when the race starts. But 500W becomes more and more difficult as they fatigue and in fact becomes impossible when 500W is more than the maximum power they have available. An athlete that reaches MPA with their power, particularly under great fatigue, is by definition “pushing their limits”.

During a broadcast, the announcer can use MPA to know when an athlete is at their limit, or is approaching it, and they can communicate to this to viewers and listeners. As a spectator, appreciating how deep an athlete is going and how they respond as they reach their limit during a race, is what we appreciate as we watch. It is the true essence of bike racing. Simply watching who’s in front and who’s in the pack is informative.  Knowing who’s recovering and who might be able to attack is exciting.

Cycling as a spectator sport doesn’t yet draw the same attention as other sports like football (soccer or American), basketball, golf and many others, especially in North America. The Tour de France and Giro d’Italia are highly popular in their respective countries but in general cycling, unlike some other spectator sports, isn’t conducive to live spectating in the same way. Broadcasts don’t have the same moments of excitement. In fact, without an announcer describing what’s happening, most spectators cannot easily understand the dynamics that are at play during a race.

Combining onboard video and data streams directly from the bikes has great promise to bring spectator closer to the peloton by improving the spectating experience. Velon was one of the first to use onboard video and data streams in real-time, during an event. Still in its infancy, they are putting in place ways for spectators to gain a greater appreciation for the sport. Still, there are obstacles to deal with in presenting information in ways that are understandable by fans. Bridging the gap between the data and an interesting broadcast is still needed. 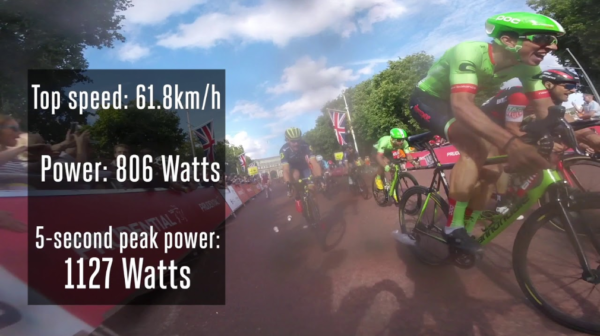 Xert can play an important role by giving spectators a window into what’s happening in a race. Just as with indoor racing and eSports, giving broadcasters access to the Xert real-time metrics from each athlete can provide a better understanding of the dynamics of the race. Giving spectators direct access to this information lets them see and appreciate what’s happening to each athlete. Notably though, giving spectators access to the data also gives competing teams access. Power data is generally heavily guarded by professional cycling teams as it provides the team information on the abilities of each rider. In the hands of the competition, it can be used to develop strategies to better compete against another team and key riders.

Opportunities in All Sport

As sporting equipment and individual athletes become more instrumented in the pursuit of competitive advantage, how this data is used in the enjoyment of the sport as well as how it is used to help the spectator experience will continue to evolve.  Power is not just the essence of cycling, but is the essence of a great many sports. From American football to athletics to gymnastics, almost universally the generation of power by an athlete is a fundamental part of the sport.  Training to generate more power is the way to prepare for competition.  Managing the loss of power during competition, is the way to win.  Using power data to help athletes perform better and spectators appreciate their efforts, is way of the future.