The ability to measure Maximal Power Available (MPA™), second-by-second provides insight into athletic performance that has never existed previously.  To better conceptualize MPA and to better appreciate what makes it so unique and useful, we’ll explain it in very simple terms.  We’re going to use a story of you going for a ride with Peter Sagan.

Assume for the moment that you and Peter are on a bike ride together in Belgium.  You’ve been training a lot to prepare for the ride.   Also assume for argument’s sake, you are the same height and weight, riding the identical bike.

You’ve been riding together side-by-side from the beginning of this longish ride in the region of Flanders.  Weather is perfect.  Road conditions have been amazing.  Luckily the riding so far has been pretty easy for you.  You’ve had no issue keeping up with him.  The ride has been fantastic and you feel good.

You reach the famous Koppenberg together with Peter, still side by side. 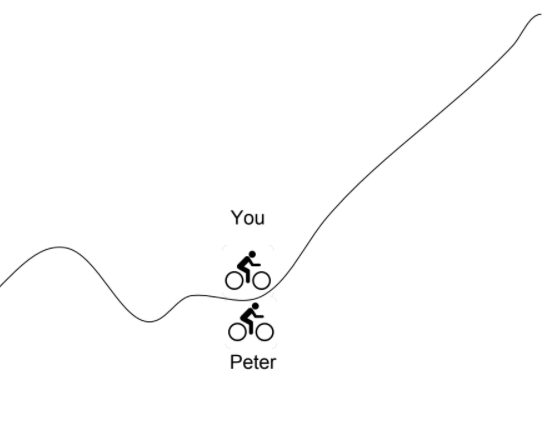 Question: At this point during the ride, who is the stronger rider?
Answer: We don’t know.  Nothing that has happened so far has given any indication.

You decide that you’d like to find out.  As you start the climb, you look down at your bike computer and decide you’re going to hold 500W and see if Peter will stay with you.  You start off and Peter rides right beside you.  You continue to press at 500W and Peter stays with you, wheel-for-wheel.  You’re now half way up the Koppenberg.

Question: At this point during the ride, who is the stronger rider?
Answer: We still don’t know, do we?  Nothing that has happened so far to provide any information that tells us.

You continue to press on at 500W, Peter right beside you.  Then before you reach the top, you blow up.  You try and hold 500W but start seeing your power numbers start to decline.  You keep pushing with all you have but Peter just keeps pedaling, now pulling away at the same pace. 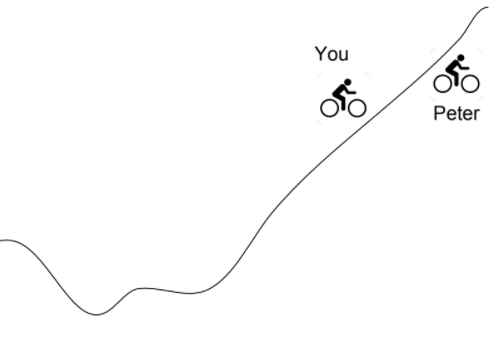 Question: At this point during the ride, who is the stronger rider? 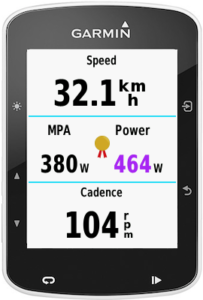 Answer: Simple.  Peter is.  You couldn’t sustain 500W any longer whereas Peter could and just kept going.

Question: At the exact moment you couldn’t hold 500W any longer,  how much power could you produce if you gave it everything you had?

Answer: Less than 500W.  Couldn’t have been 500W or more otherwise you would have used it and just kept going, right?  This is MPA.

In fact, it was precisely at that moment that your fitness, was finally known.  This exact point-of-failure where you couldn’t sustain 500W defines your fitness.  Everything before that point in time didn’t say anything about what your fitness was as a cyclist.  This is what Xert looks for in your data, even as your power fluctuates up and down, and is what is used to determine your breakthroughs and fitness changes.

Xert can predict this moment of failure in advance, very precisely with an accurate Fitness Signature. It is this ability to determine your exact moment of failure amidst thousands of data points during a ride, down to the second even, that makes Xert such a unique and valuable platform to use.

Here is your MPA Analysis Chart:

As you can see, your MPA remained unchanged during most of the ride, indicating you could produce your Peak Power should you have decided to sprint.  It started to decline just as you entered the Koppenberg and as you started to produce 500W which is above your Threshold Power.  Your MPA started to decline as your body weakened from the high intensity effort.  You were able to sustain the 500W until you could no longer.  At that moment, MPA and power touch on the chart and you had a breakthrough, right at the moment you cracked (1:22:17).  Your fitness signature is indicated below the chart and represents your fitness on this day.  It was a great effort,  but not enough to keep up with Peter. 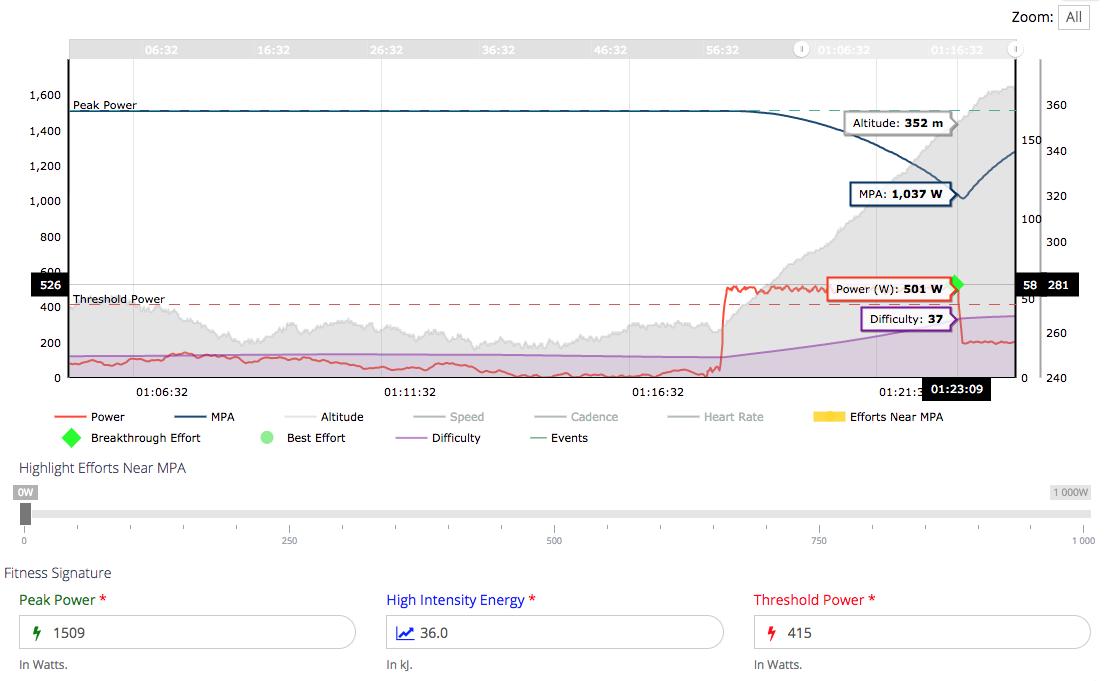 He kept going for almost another minute at 500W (01:23:09).  He didn’t get a breakthrough because he let off, perhaps saving a bit for a final push should he need it.  You can see that because he still had 1037W of MPA at that point.  His fitness signature is better than yours across all three dimensions.

What would it have taken to keep up with Peter?

If we increase your signature parameters and apply these to Peter’s data (we can use the Refresh or Extract feature on his Activity Details/Advanced tab), we can look to determine what your minimum signature would need to be in order for you to maintain pace with Peter, at least until the point he let up.  You can see that you’d need greater fitness signature parameters (note how all three are higher than before) in order to keep up with what Peter performed that day:

What if you had a different signature altogether?

Had you had a different signature, even with a much higher Threshold Power, you would have also been able to keep pace: 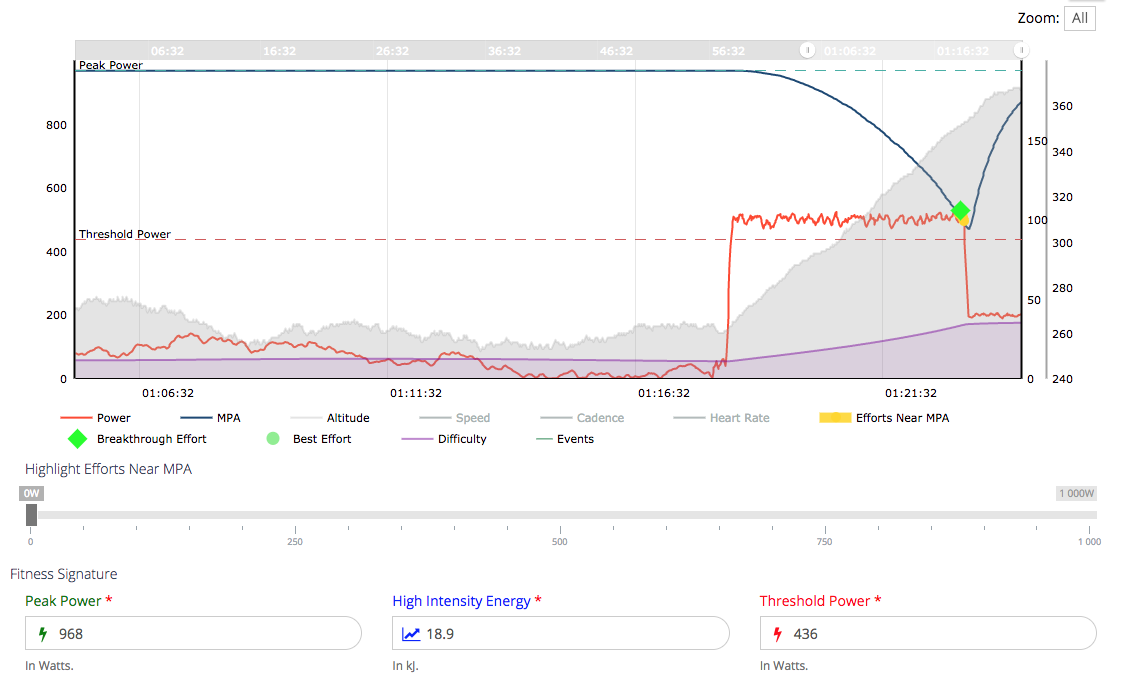 Here we apply a completely different signature to Peter’s data.  Using these new signature values, you can see that your MPA starts at a lower value, due to your lower Peak Power, continues to decline and eventually becomes a maximal effort right at the very end of the 500W effort.  You could have kept up with him with this different signature.  Note that this signature has a higher Threshold Power than Peter’s, 436W compared to his 415W.

But if Peter had sensed you near him and had he known you had a stronger Threshold Power, he likely would have acted a bit differently.  Knowing that you could eventually pull away with your higher Threshold Power, Peter may decide to accelerate away, reaching MPA in the process, something you would be unable to respond to: 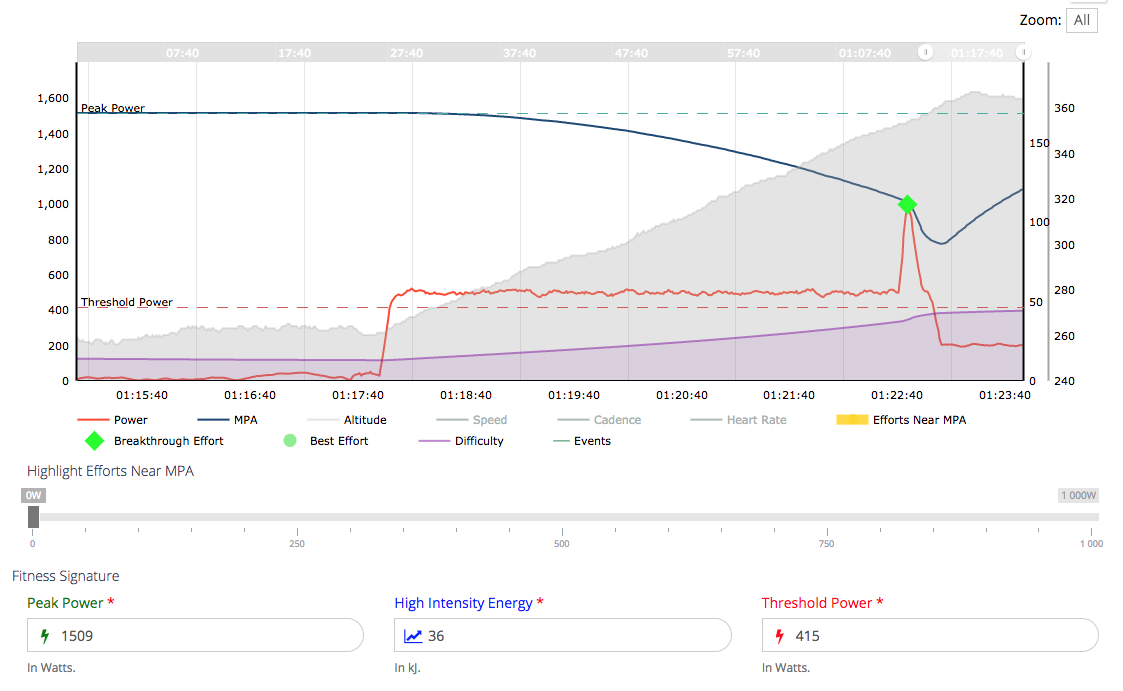 Even though your Threshold Power is 21W more than his, Peter would still have enough power to drop you on the climb.  Your MPA would have been reached but Peter would have had more available power to accelerate away.

MPA explains how one athlete is different than another in terms of their fitness and is calculated using power data together with their fitness signature.  Your fitness signature describes your ability to produce power at any given point in time, second-by-second, by calculating MPA – your upper limit of performance.  When your power reaches MPA, these moments define your fitness.

When used in real-time using our Garmin app, for example, MPA provides feedback on the power you can generate second-by-second.  It in fact forms the basis for tactics and strategies you should race with.